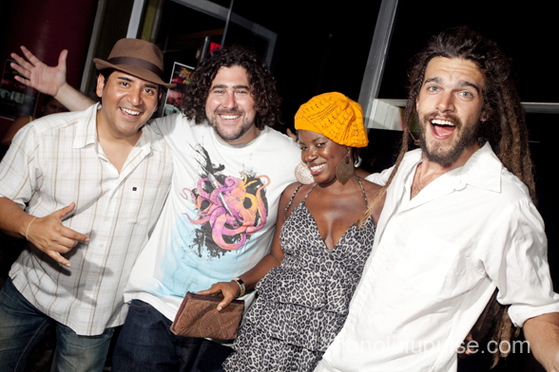 ::: JookBox City :::
Since their first show in downtown Honolulu in the fall of 2012, JookBox City has been building a quiet rumble amongst
musicians and music fans alike.  All four members of the band are seasoned veterans of the local scene, in addition to having
mainland / international experience under their belts.  Their tight arrangements and electric fusion of Reggae / Hip Hop / R&B with
Ska and Dancehall has instantly made an impact on Hawaiian Radio, with their first Single Wishing Well charting at
#1 on FM100 + Island 98.5 + 93.1 Da Paina and reaching as far as Las Vegas, Japan and Guam!!
Buy "WIshing Well"


::: Mano Kane :::
With recent explosive performances on large stages, including opening for Alabama Shakes to a sold-out crowd of 1200
at The Republik and commanding the attention of hundreds at the recent Three Walls Music Festival, these vintage rockers are well on their way
to take the islands by storm with their ambitious sights on a mainland tour after they release their second album, currently being mixed.
And to top it off, after a successful launch of their debut EP Wake Up, they are hopefuls to win their first 2103 Na Hoku Award
for their contribution to Alternative HI (Mountain Apple Company) for Compilation Album of the Year!!


::: Candy Diaz :::
As a member of the all-female songwriters collective The Girlas, Candy has played alongside and shared the stage with some of the biggest names
to come through HI in recent years, including Jack Johnson + Eddie Vedder + Matt Costa + Dave Matthews + Tim Reynolds + Justin Nozuka +Don Carlos.
She has now made the transition to being a Solo Artist, with her debut album set for release later this year.
“When I write songs, I try to incorporate how I genuinely feel about my subject matter, whether it’s a storyline or something based on my actual experiences,”


::: DJ Monkey :::
Monkey is a fixture in the local Chinatown / Kaka'ako Arts scene as an eclectic DJ...
whether delivering high-energy Moombahton / Afrobeat / World Funk sets, or power sets of dubstep,
or Mixing & Scratching live with bands on stage, he always delivers for dancers.

::: Do Braza :::
Come hungry to enjoy the authentic savory flavors of Brazilian Tapas
quickly made fresh to order, just like in Brazil, for under $5


::: Hawaiian Moonshine :::
The modern version of a traditional 18th century Okolehao, the original Hawaiian liquor.
At 100 Proof, this Hawaiian Ti Root and sugar cane moonshine is surprisingly smooth.
3 Crafted Cocktails will be on Special
Powered by